Last weekend I headed to Asakusa to see the Oiran Parade (花魁道中 oiran douchuu) which I was waiting for so long after missing the last one.

An Oiran (花魁) was a courtesan (aka. prostitute) back in the days. Especially the highest ranked Oiran, called Tayuu (太夫) were not only offering physical love but actually were talented entertainers and artists. Tayuu were something like Superstars in old time. Their beauty and status was admired by many.

Tayuu could choose their clients and such needed to try to appeal and impress for about 3 times before actually being allowed to follow her into the bedroom. One night with a Tayuu costed about an annual salary of an average worker!

Since prostitution is officially banned in Japan now, the oiran have died out. Recently the Yoshiwara (吉原) district, a former red light district of Asakusa holds this annual parade to show the beauty and tradition of Oiran.

The parade walked up the street to the stage, showed some traditional ceremony they used to hold with a potential customer and afterwards they walked back down the street.
Beforehand some Japanese kids pop group and sword fight were shown too, but I will not cover those here.

Due to the event getting super crowded, I would recommend to come rather early if you want to be able to see something on the stage.
My tactical move was to come 1-2 hours before the main oiran show. It paid off and I could see from the front row. 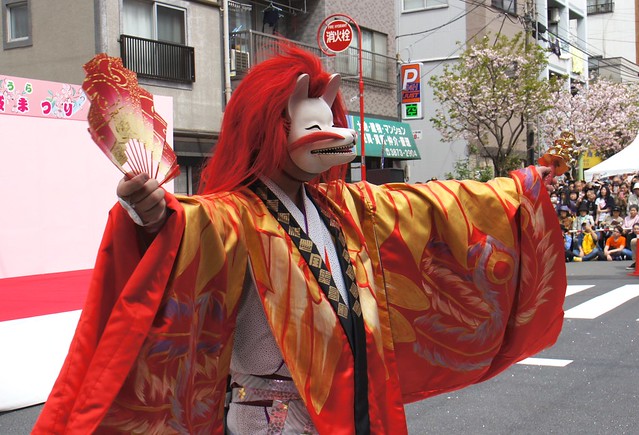 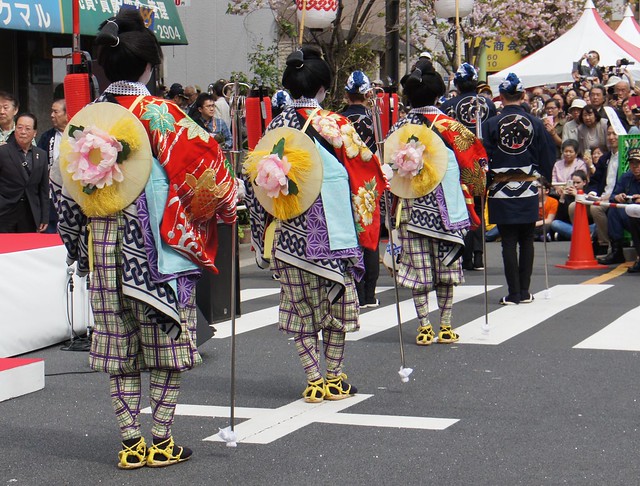 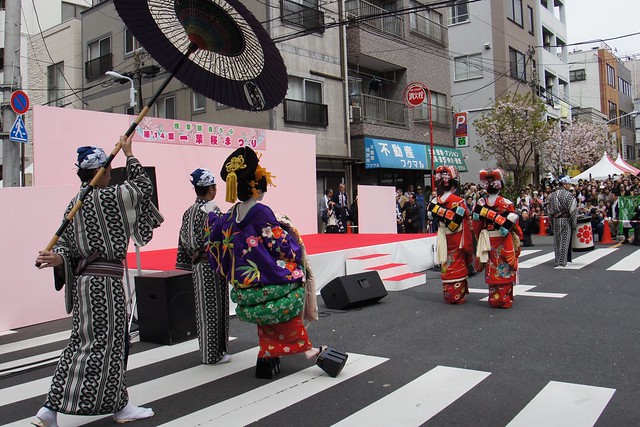 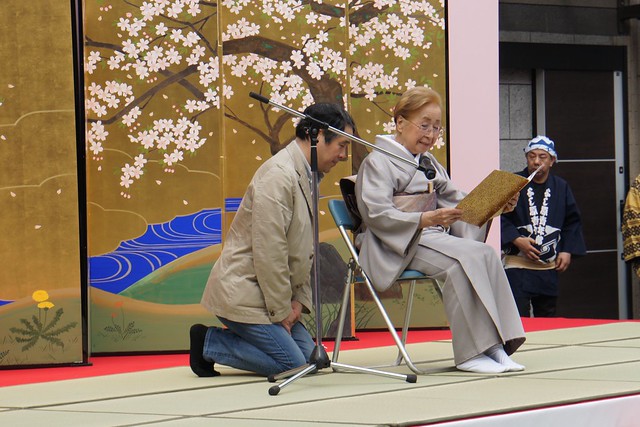 The stage play simulated a customer meeting with a Tayuu, trying to win her sympathy to be accepted as a customer. 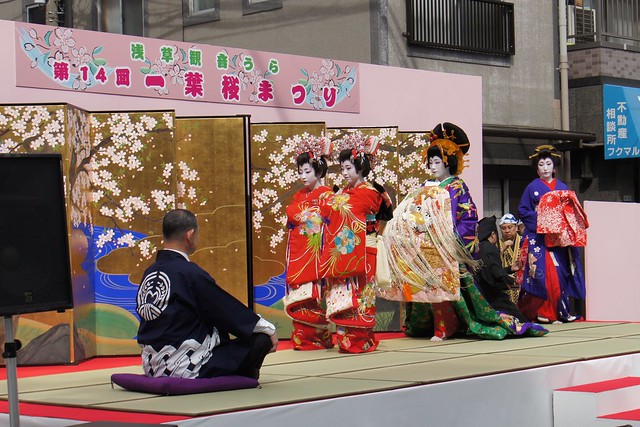 In order from left to right:
The girls in the red kimono are called Kamuro (禿) and are assistants of the oiran.
In the middle is the Tayuu (太夫) the highest ranked Oiran.
On the right are the Furisode Shinzou (振袖新造) apprentice Oiran who hope to become a Tayuu some day. They learn from the Tayuu. 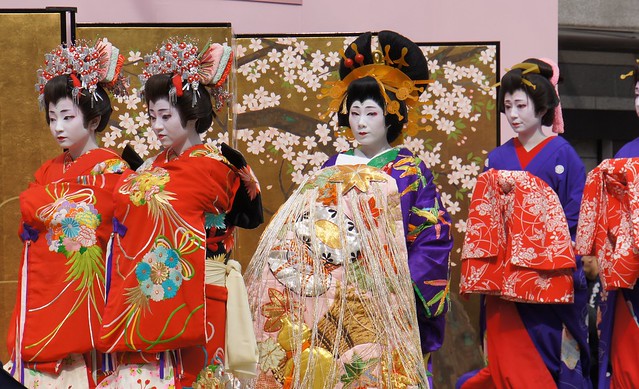 After sitting down the Furisode Shinzou proceed to greet the customer and serve him some sake. If the Tayuu later drinks from the same cup it means that she accepts this customer to sleep with her in the future. 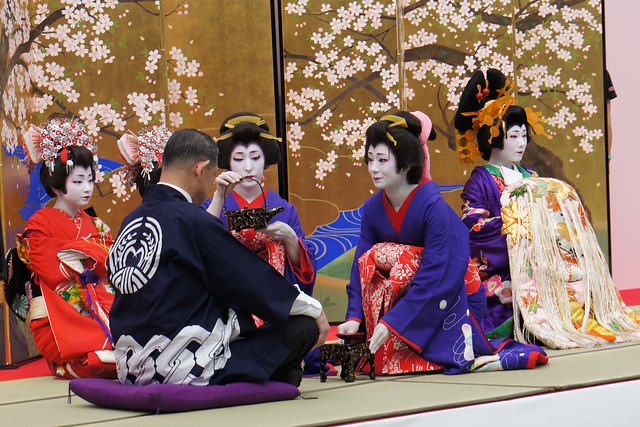 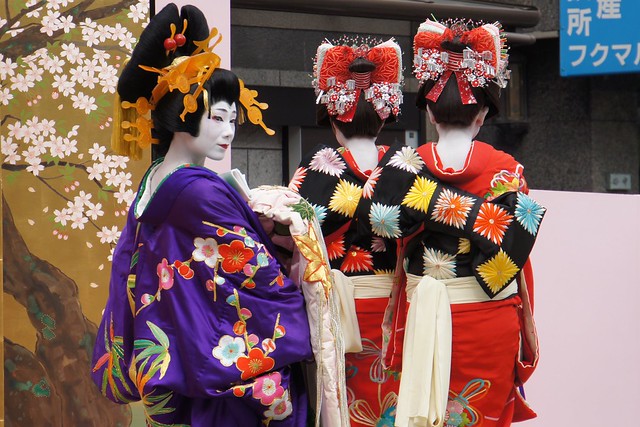 This year they had two Tayuu present so here is the second one. The show was the same. 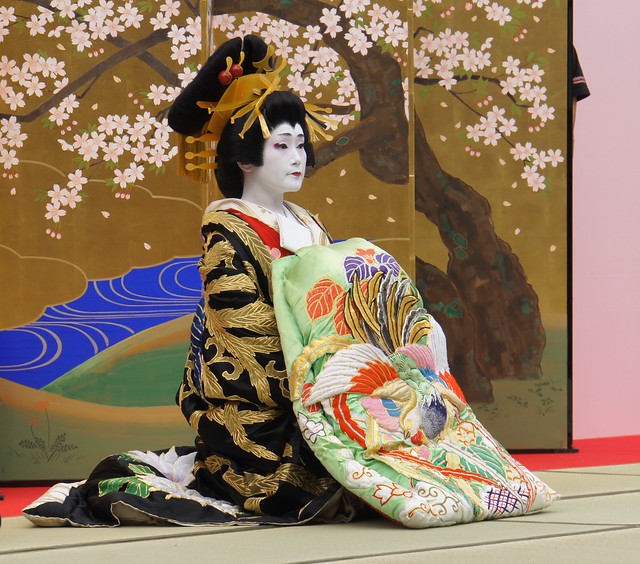 After the previously explained ceremonial act of sharing the sake cup, the Tayuu will sit down next to the customer and stuff the pipe and lit it for him to smoke. 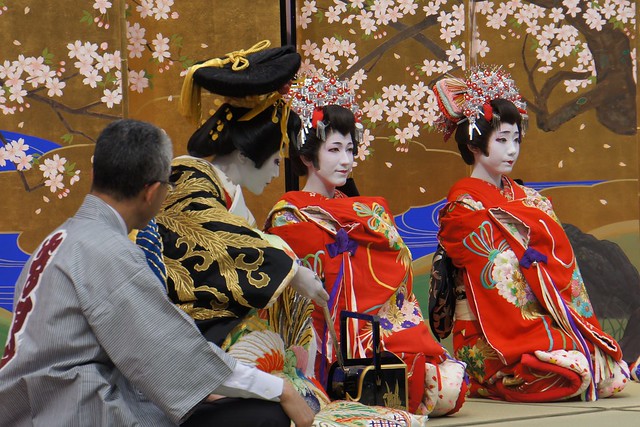 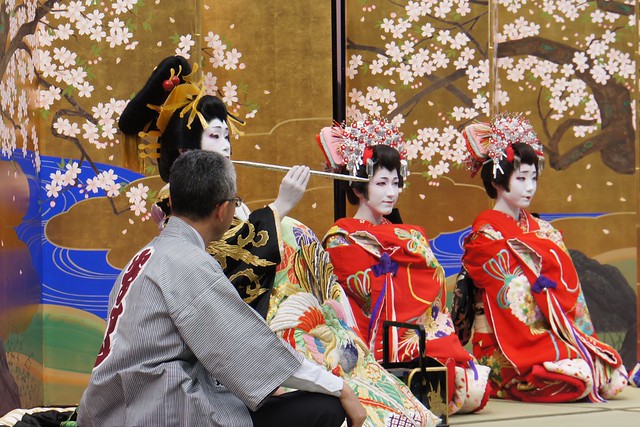 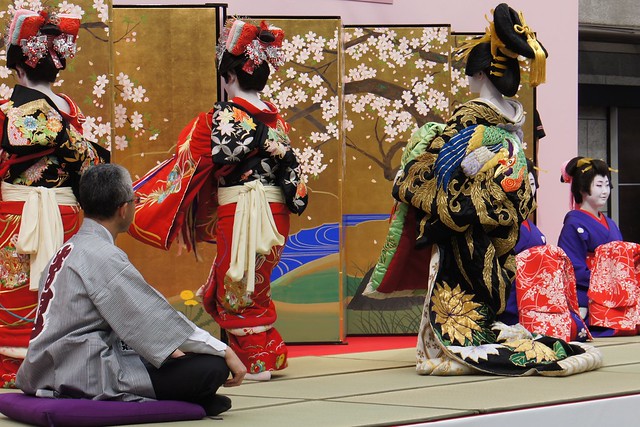 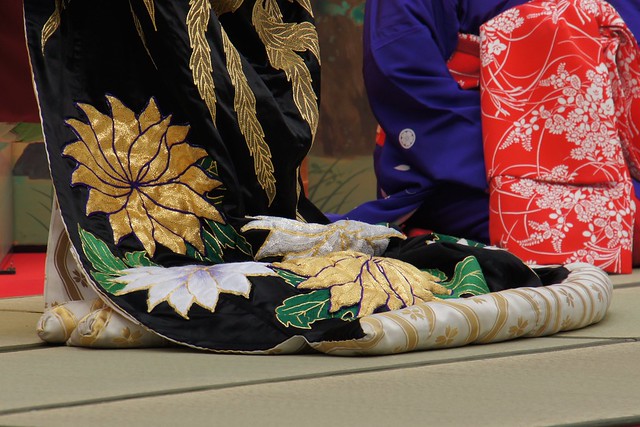 After the ceremony a group picture was taken before they proceeded to walk back the street. 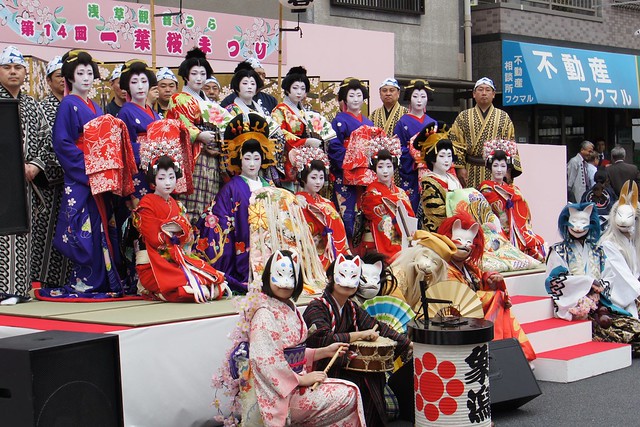 All the colors and details – so breathtaking! 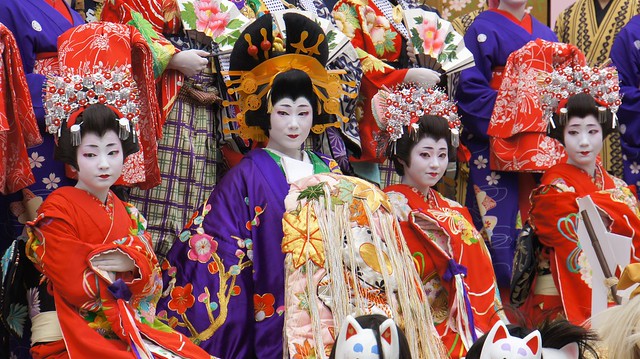 In order to see the group walking I changed position and walked down the street as I couldn’t see well from my position at the stage. 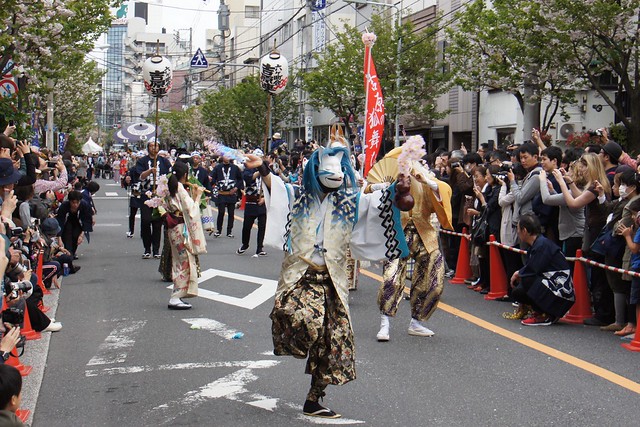 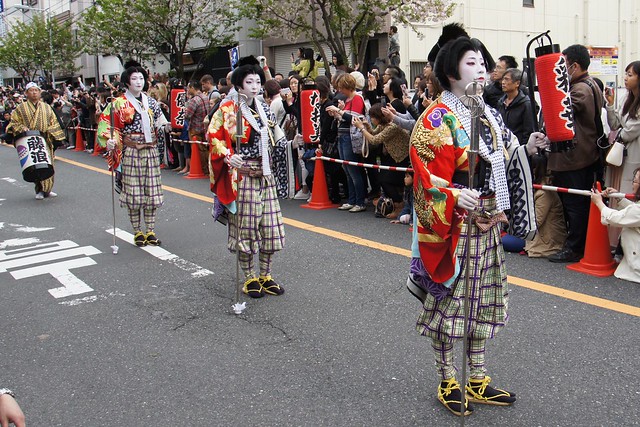 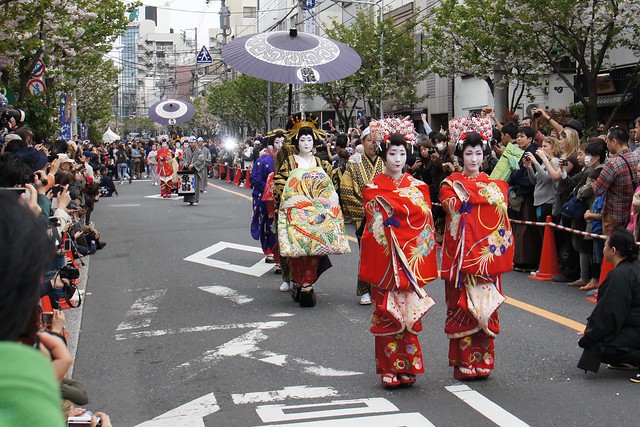 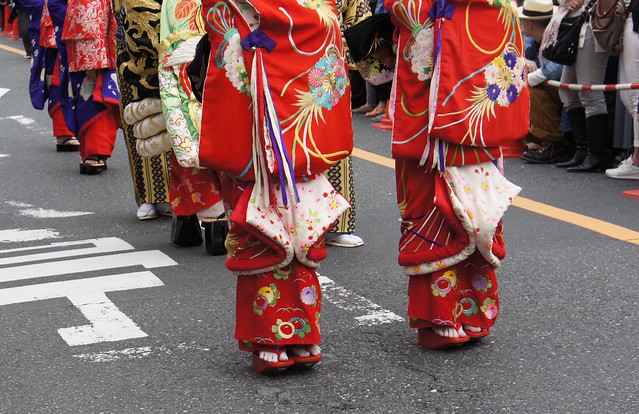 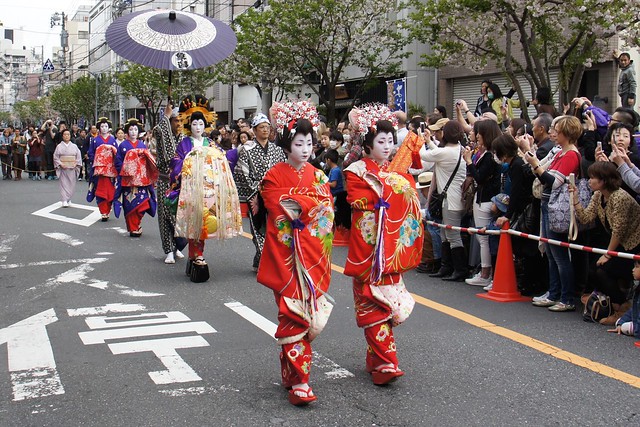 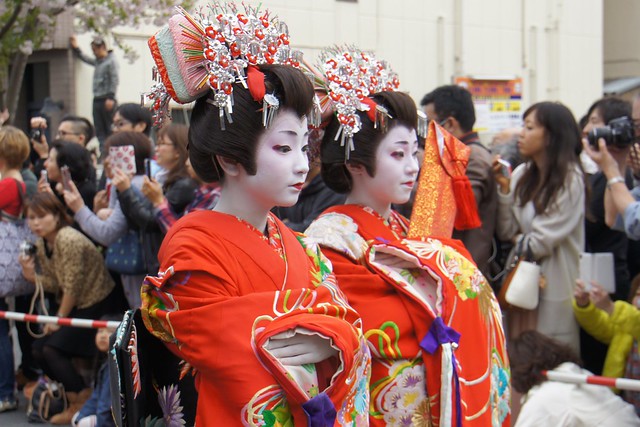 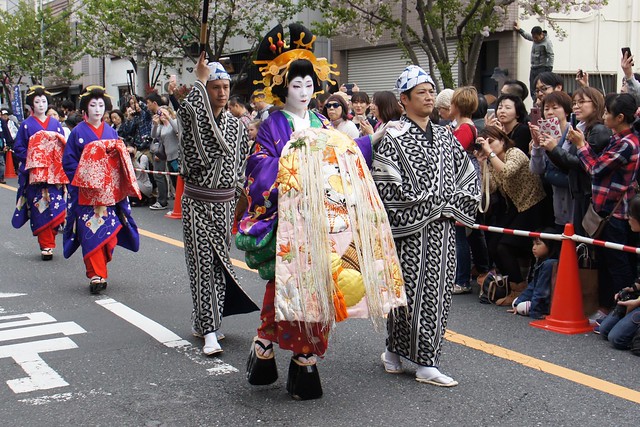 The man on the right is the Katakashi no Otokoshuu (肩貸しの男衆) – the lending shoulder man (if translated one to one).
You might have noticed all the layers of heavy silk and the big wig with decoration and the large platform sandals – all that weighs about 30 kg (66 lbs)! That is a heavy burden, so she uses this man as a support to not trip over.
(I think its kinda funny how the mans face looks like the burden on his shoulder must be very heavy. Haha) 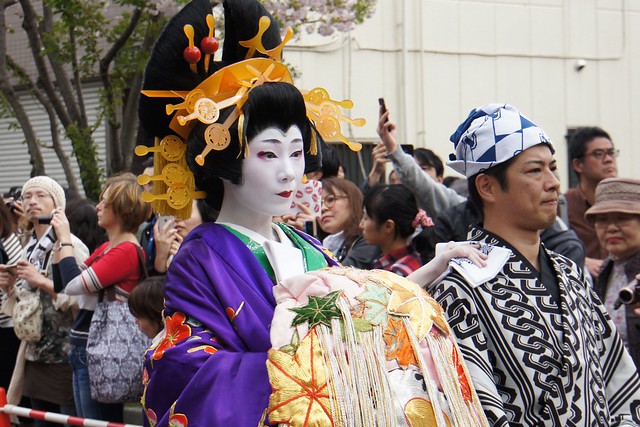 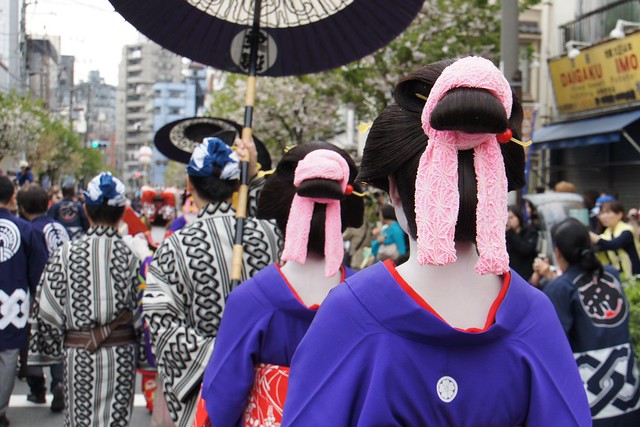 The Tayuu has a distinct walking style in these platforms with sweeping them outwards like this. It is part of the art and beauty. 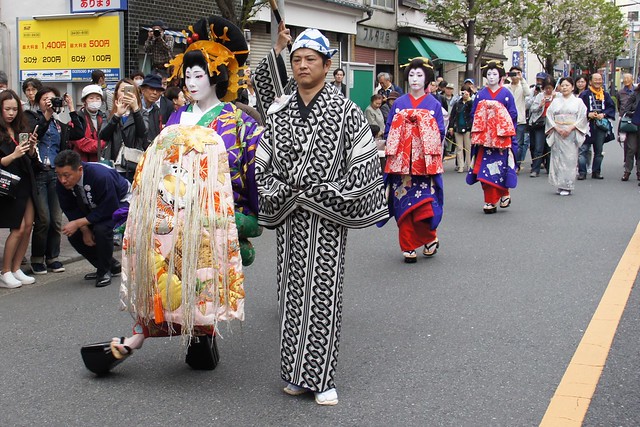 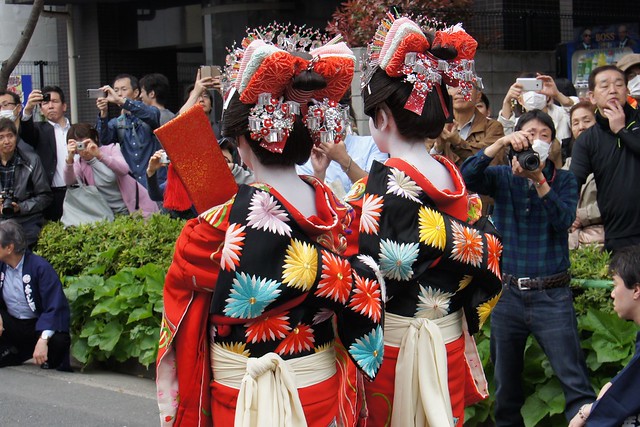 It was a very beautiful event and I am super grateful that the weather was nice.

If you would like to see this event when in Tokyo I include the infos as below.
However please check the details again before the trip due to the event possibly changing in date location and schedule.

The stage will be on the right side of the marked blue route. They will move to and from the stage via the blue marked path. 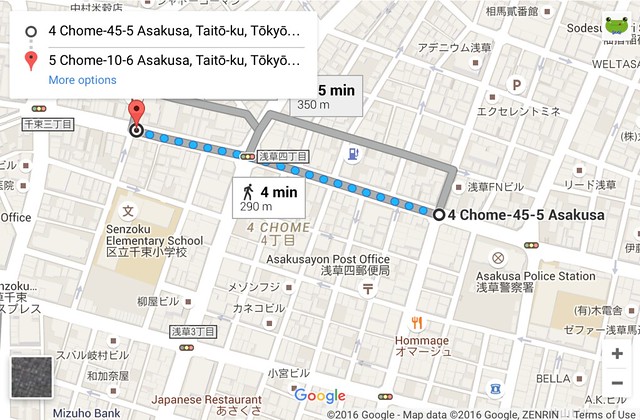 I hope you enjoyed the pictures.

Let me know if you have any questions in the comments.

Kimono: Kyoto to Catwalk – An in-depth look at the exhibition and chat with the curator 必見、イギリス着物特別展ヴィクトリア&アルバート博物館の感想、キューレータさんへのインタビュー

On the 29th of February 2020 the world famous Victoria & Albert Museum in London opened its doors to...

Last Saturday I went to Harajuku's LaForet Shopping mall to check out the nice kimono pop up shops there....

While I have been busy with rebuilding the site and life in general - this blog was on hold....

Yesterday I jumped back into my kimono, did my hair and went to Kimono Salone - a 3 day...

What a rollercoaster of emotions we are currently trapped in, with all the COVID-19 drama, am I right? Since...

The next runway show I attended at the Mercedes Benz Tokyo Fashion Week was JOTARO SAITO - a Japanese...

Back in March RinRin called me about a fun kimono collaboration in the cherry blossoms. She just had her hair...

Due to business I had the chance to get back to Kyoto earlier than expected. Also an awesome and timely...

Last month I had an incredibly fun crossover collaboration with my dear friend Sasa from New York. Sasa is the...

The weekend was full of kimono fun again - Kimono Salone was opening its doors for a second event this...